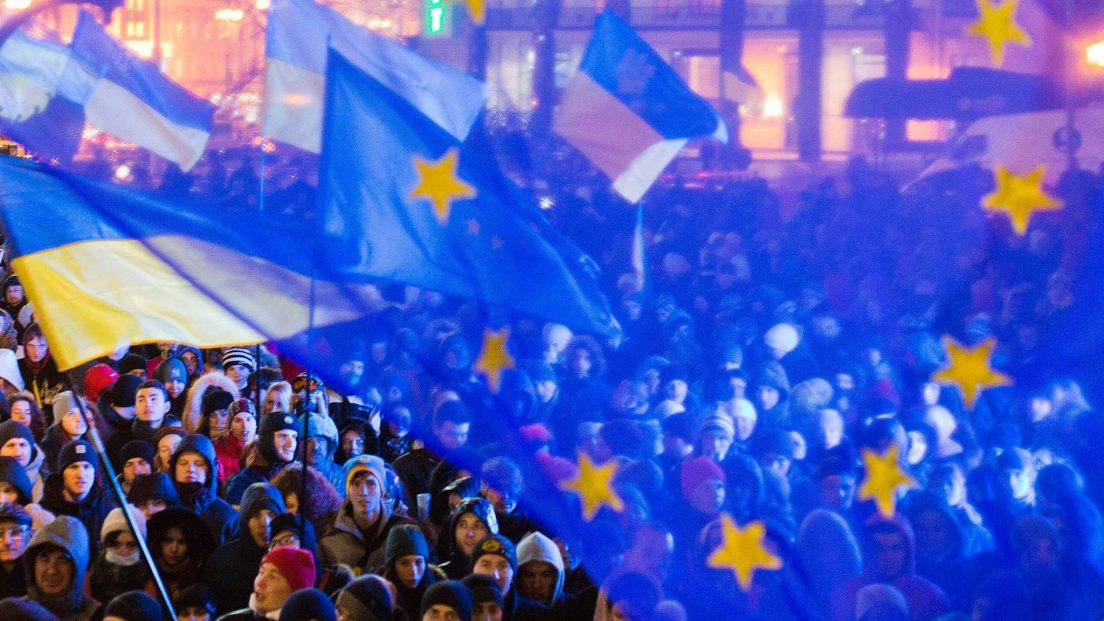 5 years ago the most crucial revolution happened in Ukraine.  These were 5 years of Maidan and these were 3 months that changed the country, united people and made Ukrainians believe in their country and its future like never before. This game-changing revolution has several names: the EuroMaidan, The Revolution Of Dignity, The Revolution For Democracy and European Choice.

It all started on the 21st of November 2013 when the former President of Ukraine, Yanukovich, and his government refused to sign an association with the EU. They decided that there is nothing to do in Europe for Ukraine. That very evening hundreds of students went to the Maidan in order to protest against the government`s unexpected and incomprehensible decision. In the morning, people woke up and saw horrible news. 300 students were violently beaten by 400 security forces. Later the authorities will justify these actions by claiming that the students prevented utility workers from installing a New Year`s tree.

Unsigned papers, and, which is more, this unbelievable cruelty of the government, shocked people all over the country. In a few days, more than 1 000 000 people, hundreds of tents and dozens of cars were on the main square of the country. According to different polls, more than 20% of the country took part in this revolution. There were a lot of harsh clashes between people and security forces called “Berkut” during these 3 months. They were ordered to disperse people at no matter what cost. Nevertheless, the peak of the authorities` cruelty and meanness was that state-hired snipers were constantly shooting people. EuroMaidan is often referred to as the revolution built on blood. This is absolutely true because during the most intense 4 days, 18-21 February, 82 people died, 622 were seriously injured. In general, during the course of 3 months, 106 people were killed and more than 2500 were suffered from injuries. These people are called the “Heavenly Hundred” and are commemorated as the heroes of dignity and the revolution. The distinctive feature of EuroMaidan was that it was not only about Kyiv, it was about Ukraine in general. The actions of protest were happening all over the country, from small villages to huge industrial cities. Besides, hundreds of Ukrainians and supporters of the revolution abroad were organizing protests all over the world.

Today we celebrate the 5th anniversary of the EuroMaidan but do we really have a reason to celebrate? The main goal of this revolution was to change the authorities, but we see that the oligarchs are in power again, there was no power upgrade and there is still no new election system. People are not satisfied with the new government`s reforms, especially medical, and educational ones. What is more, there is an economic default in the country, annexed Crimea peninsula and a war with Russia, which leads to depression, pessimism, and a massive emigration. The main unsolved issue rests, of course, systematical corruption. “Corruption is still here, it just changed its style,” says an activist of a political organization, Dmitro Korchynskiy. Nevertheless, the most terrifying thing for me is that the government, the one that was built on people`s blood and lives, still has not even brought to court people that are guilty of purposefully murdering people on the Maidan. The only thing that was done is disbandment of “Berkut” security forces.

However, even taking into account all the unfulfilled desires, one cannot underestimate the value of the Maidan. This revolution united the nation and gave people hope for a better future. The attitude towards the country has changed significantly, patriotism is in the air and a volunteer movement is spread largely. Recently, a member of a political opposition, O.Bohomolets, was asked whether she would go on the Maidan again but knowing the consequences if given a chance. “Yes, without any doubt. To build the economy is easy, much easier than a national spirit”, was her answer. The results of the Revolution of Dignity are extremely important: Yanukovich`s pro-Russian government has been tumbled down, the European integration course has been installed, Ukrainians can travel in Europe without visas now, Ukrainian own Orthodox church that does not depend on Moscow was created and much more. It is worth saying that an absolute majority of political experts claim that in the long run, the Maidan has won.

Ukrainian journalist Anastasia Bahalika said about this year anniversary: “We are all tired. Someone is disappointed, someone has migrated, and someone is not with us anymore. But for this 5th anniversary, I want to say that I love you. Thank you for changes made.”